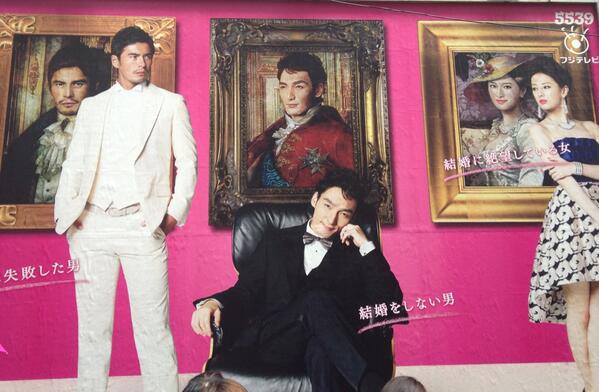 I’m starting to kind of get back into my groove with blogging. Sorry for being a bit inconsistent over the last few weeks but I guess it was just kind of hard to get motivated about it with all that was happening. Anyway, just before I finished watched Episode 1 of a new drama from this season called Dokushin Kizoku(独身貴族 or ‘Swinging Singles’). Its airing on Thursday nights and stars Tsuyoshi Kusanagi, Keiko Kitagawa and Hideaki Ito playing its main characters. I think that it might be a love story drama but it comes with a twist…

What’s this drama about?

The story is centred around the CEO of a Movie Producing company, his name is Mamoru Hoshino(Tsuyoshi Kusanagi). The first episode kicks off with Mamoru talking about how he absolutely despises the idea of ever getting married. He goes on a long rant about how dating is meaningless and how boring it would be to live with the same person until you die. Ironically he has this discussion while he is on a date, which was actually arranged by somebody else. But anyway, the main point is that he does not like the idea of relationships and he absolutely dreads the idea of getting married one day despite the fact he is already in his late 30’s.

Mamoru lives with his brother Susumu(Hideaki Ito) who is his second-in-charge at the same company. Susumu has actually recently divorced with his wife and came out of the divorce with almost nothing, thankfully for him he works at what looks like a very lavish company so neither of the brothers seem to have even minor issues with their finances. Despite having just survived a divorce Susumu is a massive player and brings back different girls to his brothers house to have sex with almost every night. This is how the two of them differ fundamentally, Susumu is a ladies man and Mamoru is a more serious type(or just hates women, I don’t know?).

The boys’ aunt is the owner of the company and continuously makes Mamoru go on dates with daughters of her acquaintances. Mamoru absolutely hates this but begrudgingly goes along with it until one day when he tells his aunt that he has next to no interest in ever getting married. She uses this as an opportunity to make a bet with him. He’s trying to move the plan for a new movie forward and it’s pretty tough because the scriptwriter on it is screwing him around, and that has caused an extension from the original deadline of the plan. The bet is simple: if Mamoru can’t make the plan succeed he has to marry the girl that his aunt introduced to him that day(that he does not feel he gets along with well at all). He accepts this bet, confident that everything will be fine and that he can trust the scriptwriter.

Then the scriptwriter goes missing. Mamoru tracks him down and goes to talk to him in Nagano but when he finally finds him the scriptwriter makes it clear that he has produced absolutely nothing at all. Mamoru is crushed by this, and it seems like he is going to lose the bet with his Aunt and will have to get married. He goes home and is talking with his brother on the couch and after a few minutes they realise that someone has left a script on the table of their lounge. Mamoru furiously reads through it and calls the writer immediately.

So who was the writer?

The writer was one of the cleaners of his mansion, Yuki Haruno(Keiko Kitagawa). From the sounds of it her main job is cleaning but she’s been trying to be a successful author for years and has failed numerous times at writing a hit. She fails again in this episode, and is almost about to quit writing for good and go back to her home town. When she is cleaning Mamoru’s house for the last time she realises that it’s the house of a famous movie producer she knows and she decides to plant her script in there as her last hope. Mamoru happens to call her right as her bus is leaving back to her home town, Aomori. How dramatic, just like a movie!

So what does Mamoru think of the script?

He thinks that it’s absolute trash. Like I said she’s trying to be a successful author so the base of the work is a novel. He finds the characters weak, the story to be overly naive and most of the plot twists to be really typical. But despite this he thinks that the lines are the best part about it and he proposes to try and turn it into a movie. Yuki accepts straight away and he then also proposes that she works at his office as his assistant to get experience in the movie field. He tells her that he’ll hire her on a one month contract and that if she’s useless he’ll fire her after the month is up. The episode ends with Susumu giving the script to one of the big wigs they were trying to convince to make the last scriptwriter’s movie, but he submits it under the last scriptwriter’s name instead of Yuki. So I can imagine this is going to be a major part of the plot and there should be some trouble waiting for everyone regarding it later on in the series.

Is it worth watching?

Yeah definitely. The cast is good, the acting is also very good and the plot itself is pretty interesting in my opinion. It’s clear that there’s going to be some sort of romance that’s going to happen between Mamoru and Yuki but it should be entertaining to see all the ups and downs on the way, I mean he doesn’t want to get married to anyone after all so I’m assuming he doesn’t make exceptions about it easily. It’ll also be interesting to see whether or not they get the new movie’s plan through or not because if they don’t Mamoru is going to have to get married and I’m guessing there’s going to be some sort of love triangle happening, or maybe even a square involving Susumu. We’ll just have to wait and see. Anyone else watched this one yet? Tell me what you think about it in the comments if you have.

10 thoughts on “Dokushin Kizoku Episode 1, not too bad.”