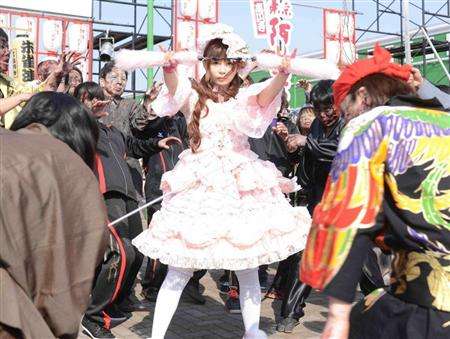 Shoko Nakagawa doesn’t just do dramas and variety TV shows, she’s also active as a singer, an illustrator and a manga artist. Soon(the 25th of this month) she’ll actually be appearing in a new Hero-Action movie called Nuiguruma Z. During an interview recently Shokotan said that during her childhood she didn’t have many friends so she would play superhero in her room, practicing poses and swinging around nun chucks. For Shoko personally this was actually a very dark period of her life but…

She said that it actually came in handy for the shooting of the new film. “The only exercise I’m good at is swinging nun chucks. Ones that I made with pink fur attached during my childhood really matched the costume[in the movie] so I used them” she said. When questioned about her dreams Shokotan responded saying that “I’ve always wanted to play a killer demon. Oh and I also want to become a Chanson singer one day and open my own Chanson bar. But before that I really want children!”.

When questioned about marriage the multi-talent said that she does want to get married but before that she wants children. Around 3 at least. She’s getting about anxious about birth, probably because she’s getting close to her 30s. Shokotan also said that her perfect man would be better than her at games, muscly and like cats. Guess I’m out then, what a shame.